Drenched in sweat, baking in the sun, lining up to see two giant rodents. Marge and the wifey are "patiently" waiting in benches flanking the giant rat gazebo.
Lots of fellow sweaty Asians in the long line with me.
The Chinese profess to abhor the West, particularly the Americans. But they sweat it out for almost an hour queuing just to spend a few stupid seconds to have their chinky-eyed pictures taken with one of the most prominent symbols of America's conquest of the global culture.
If us Chinese with roots in the Mainland are really that much better than the Whites, then how come I don't see people lining up for photo ops with a "Lao Hu Chi" mascot?
* we'll be right back after a short music video break (no multitasking on this stupid tablet...)
Malou mercifully hands me an ice-cold bottle of water in a plastic bottle that claims to be biodegradable.
Almost our turn. Dammit. All this for a lousy picture I can photoshop. Hell, I get paid decent money to photoshop shit like this.
Almost at the mice... Almost noon... Almost melting...
Between the crazy humid heat and the crazier ice-your-brains-out air-conditioning in the outlets, Disney Hong Kong will end up giving you a cold and kill you. And then there's the out-of-their-minds food prices, which might make you opt to go hungry. And I sincerely suspect some of the Koreans we've run into are infiltrators from the North who are all about nuking half the planet.
There's war, famine, pestilence and possible death.
So given all that, you can imagine how they might have based Disneyland on the Book of Revelations and run the hell for your pathetic life. 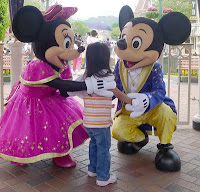 Marge is napping and the wifey is bored, so I fart my way through a ride in Space Mountain. The next riders should beware the Roast Pork Nebula!
Tinkerbell was awfully friendly, but looked like a fag.
My biceps hurt.
Goodbye, Mickey... We're heading back to the hotel.
'catch you later.
Posted by Jasper Greek Lao Golangco at 2:28 AM No comments: