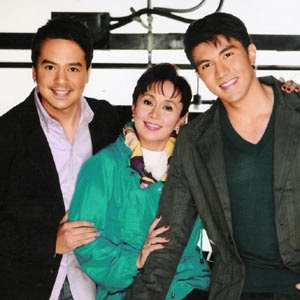 The choice came down to a movie that starred a comedienne used to be known for doing impressions of Vilma Santos, or, after a long while... Vilma Santos.
White-hot funny-girl Eugene Domingo top-bills “Kimmy & Dora.” The comedy is enjoying very good word of mouth, in addition to Eugene’s reputation and/or penchant for lighting up any movie scene she’s in. But we opted for the Vilma vehicle “In My Life.”
For one thing, the wife was partly curious about the inevitable travelogue-ishness of the movie, “In My Life,” which was set in New York. It didn’t hurt that it had “Ate Vi,” who has been absent from the silver screen for quite some time now, and my infant daughter’s crush, ABS-CBN cash cow John Lloyd Cruz. And in a bit of pseudo stunt-casting, we also get Luis (formerly known as “Lucky”) Manzano playing Ate Vi’s son, and resident gay love interest for John Lloyd. Yep, they’re a gay couple in the movie.
"...there’s grit and nails all over the scene whenever [Vilma is] there..."

So in the movie, Vilma is “Shirley Templo” (methinks the joke in the character name will be wasted on many of the audience), a separated lady being convinced to sell an old house officially bequeathed to her by her late father-in-law. Knowing this, she buys herself a plane ticket (on a librarian’s salary) to see her gay son in New York, and forces herself upon his life. The writers do their hardest to show that Luis, who plays Vilma’s son, Mark is the busiest man on their side of the planet. But for the most part, Mark (a.k.a. “Lucky”) just succeeds in looking constipated most of the time.
Speaking of constipated, Vilma Santos seems to have over-acted in this movie... there’s grit and nails all over the scene whenever she’s there. Even if grit and nails aren’t necessary for the supposed scene. The forced comedy of some parts were obviously... forced.
John Lloyd Cruz plays Noel, Mark’s hard-working, multiple-job-holding illegal immigrant (a.k.a. TNT), gay lover. Noel holds many jobs, from limo driver, to housekeeper, to Vilma’s nanny. All of which seems to indicate that he’s everyone’s favourite sucker (no gay pun intended).
Despite being her most constant companion, Shirley somehow still finds it in herself to think ill of Noel. The character of Noel, who is portrayed with such natural earnestness by Cruz, that one can’t help but think that Shirley is a schizo-case who should be thrown back to the third-world country where she belongs. We later find out that Mark is suffering from Stage 1 colon cancer. And Noel is such a sucker (again, no pun intended) that he does not tell Shirley of her son’s illness just because selfsame son told him not to.
Many unexpected things happen (yes, honestly unexpected), and the characters are put in the typical Pinoy movie mandatory situations where every sentence has been designed to be spoken with grit and tears even if it seems absolutely unnecessary.
There are many instances in the movie that require a suspension of disbelief. And one has to keep reminding one’s self that considering the absolutely royal pedigree of the lead cast, along with the location shot, surely Star Cinema will pull out all the stops to produce a very tight story. Something worthy of Ate Vi’s long-awaited visit to movie-making.
"...why do our movies make heroes of illegal immigrants, who are technically felons...?"

But no, the plot’s integrity is spongy at best. I’m guessing they didn’t find enough brand sponsors to pay for better writers...
Such as, why would a glamorous-looking intelligent Filipina woman who owns an American passport stick to a job as a librarian in what looks like a public school? How come such a well-read woman (a librarian!) suddenly switches off her brain and behaves like an uncultured idiot upon stepping on U.S. soil? How come she can’t keep a steady job? Does the movie indicate that the quality of Filipinos in our local academe is of such poor quality that one cannot even hold a simple job as a waitress in the U.S. of A? And why does Tirso (a.k.a. “Pip”) Cruz III, who made a cameo, look like an endorser for Botox, smiling like someone who let Hannibal Lecter have his brains for dessert?
... and why do our movies make heroes of illegal immigrants, who are technically felons in the U.S.? all the while improperly illustrating the sad “convenience marriage” practices of our countrymen in foreign soil.
These are questions begging to be answered... But probably not by die-hard “Vilmanians.”
Luis has his moments, but will benefit from acting classes. Ate Vi has nothing left to prove, but seems to think that over-acting can make up for weak points in the script... John Lloyd... was honestly excellent. What’s admirable about the guy as an actor is that he understands that being emotional in a movie doesn’t always mean you have to start screaming at your co-stars and turning on the waterworks. He has a great gift for emotional nuances, a concept which seems to be alien to many “artistas.” And such elements make his acting that much more realistic and impactful.
Considering that the local cineplexes have been lacking in major label local productions lately, “In My Life” (or even “Kimmy & Dora”) deserves a look. If only to support a local movie industry that is not only on life support, but probably even a zombie struggling out of a morgue.
And while the movie did not leave a lasting impression on me (and probably the wife), at least i did not feel totally robbed when we walked out of the cinema.
‘Catch you later... (and catch a local movie today...)
Posted by Jasper Greek Lao Golangco at 9:31 AM 3 comments:

As a young, budding music lover, I was told by our nanny that back in the day, that every entertainer in the country had to have a tag that identified them with a foreign act.

At that time, I didn't give a crap.

Then came 1992, and a remake of Sharon Cuneta's classic suicide anthem "Sana'y Walang Na'ng Wakas" was delivered on the airwaves by a male voice whose phrasing had a tinge of... Johnny Mathis... and totally owned the song.

After several years of typing his name on limewire and coming up with absolutely nothing, I have relented and have bought a compilation CD that Viva Records has just made available containing Jun Polistico's (a.k.a. Mr Golden Voice's) badass version of this Willy Cruz-penned wrist-slasher.

Ripped copy above with lousy compressed audio for anyone to enjoy.

Posted by Jasper Greek Lao Golangco at 11:18 AM No comments:

Popularity vs. Productivity: The Long Weekends of Doom

It’s amazing how it seems to take forever for congressmen, senators and the rest of the politicians to pass laws and pretend to address social issues in the country. But it seems so easy to declare one new unwarranted holiday after another.

In Gloria Macapagal Arroyo’s desperate attempt at trying to zombie-fy her deader-than-a-door-knob popularity level, she has been declaring holidays left and right. Of course, that’s as long as there is a big potential bloc vote involved.

Early last night, i was just informed that there would be no work on Monday. And the sadness of it is that i only had until Wednesday in Manila for the week until i have to go up and do some store stuff. So in one fell swoop, Gloria just took away 33% of my Manila workweek. And for what?

Truth be told, I am a fan of the Iglesia ni Cristo. I love how organized they are, I love the architecture of the temples/churches and all, and I have nothing but respect for the guys who are keeping that thing going and going strong. But having said that, i do not think it is justified to declare Monday a holiday just because one of their leaders will be buried that day. Nothing against the late Eraño Manalo, but he isn’t even the founder.

What about the many meetings of many professionals who have things stacked up on Monday? What about the entire week’s schedule that have all been pushed back? What about make or break deals that could have been made this Monday?

What about employees who have no-work-no-pay deals? They lost another day of work on their paychecks.

And all because Little Gloria Arroyo wants to desperately kiss some major Iglesia ass. Tsk tsk...
On September 21, we will be observing another new Holiday that Gloria created. That of the official end of Ramadan. Generally speaking, Muslims will feast on that day. And yes, so Gloria. But oh, we forget... she feasts everyday...

My condolences to all my Iglesia friends...

Posted by Jasper Greek Lao Golangco at 10:55 AM No comments: 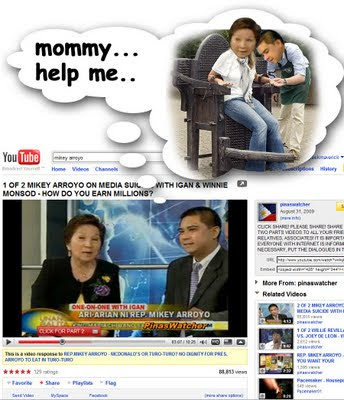 Dear Madam Gloria...
I am writing you to congratulate you regarding the results of the recent interview of your beloved son, Mikey Arroyo with Mareng Winnie Monsod and the politically proper Arnold “Igan” Clavio.
There is nothing more rewarding than a politician who has shown himself all naked and baring his very soul on national TV. It doesn’t matter whether or not it was his intention to be so transparent, or if he was just too dumb to even lie competently.
But I commend him for his patience and absolute restraint from going all Neanderthal on Mareng Winnie, who was having a field day with him and his pea-sized brain. You have taught him such, Madame President that I believe that he will grow up with a whole rolodex of revenge methods for political enemies just like you do.
Just like the way you took away Madame Corazon Aquino’s security detail. Totally classy.
You are truly a wonderful mom to Mikey. Imagine, having a son so stupid and still manage to give him a government post. You are truly spending a lot of money and pulling so many strings to do this. Bravo, mom.
http://www.youtube.com/watch?v=WJ_rC-wnqFI
http://www.youtube.com/watch?v=4q0JKzpjh_o&feature=related
Cheers and i hope enjoy the long weekend you have once again created...
Nagmamahal at nabibilib...
New-youtube-addict-because-of-mikey
Posted by Jasper Greek Lao Golangco at 10:13 PM No comments: