The concert on July 17, 2010 was dubbed "OPM Through the Years," and it featured a relatively impressive line-up of local talents who have had their share of radio hits or have been on stage long enough to seem to be able to assure a good show. 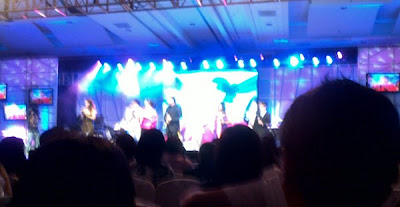 My compliments to Eloisa for getting good seats through Ticketnet, and off to SMX went the wifey and i... Concert's over, wifey and i had gone home, and here's my skinny on the performers for the night:
Gino Padilla - after an enjoyable album of remakes (see review here), Gino Padilla was actually the performer I wanted to get the most of from this concert. And with Joey Albert flying in for the show, I was hoping for a duet of Joey’s classic “A Million Miles,” which I unfortunately didn’t get.
Gino’s voice is still in fine form… He also managed to find room in the crowded repertoire to belt out three of his signature songs… wasted a lot of talent and stage time doing “Mr. Suave” and another novelty song. Will hopefully catch another of Gino’s performances where he breathes life into the classics like he did on his latest album. 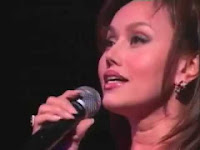 Verni Varga – one of the mainstays of TV music numbers back when TV’s had rotary channel changers, and “Voltes V” posters were given away by Purefoods together with overly colored hotdogs, which they still sell today.
My ignorance, and rather early age during her heyday somehow excuses me from being familiar with whatever songs she put out on the airwaves. But all her venue touring did her well in that she was obviously still used to belting it out with the best of them.
But we went there looking to listen to “OPM,” not Verni’s (albeit impressive) version of “Power of Love,” and “Pokerface.” Good thing she finished up with her original “You’ll Always be My Number One.”
One last thing… In this day and age, nose-jobs are not only acceptable, they are the norm, especially for people in showbiz… but why do most nose-job patients almost always look alike? There were times when Verni almost resembled an early version of Madam Auring.

Charlie Green – who the…!?!? I eventually found out he was one of those “internet sensation” types who found his 15 clicks of online fame doing a kiddie version of the standard “Summer Wind.”
For a kid, sure he can sing. But it seems like little more than a novelty to me to watch a pre-pubescent version of Michael Buble. Let’s see if his “singing career” survives the testosterone onslaught and subsequent voice change.

The CompanY – the singing of this fine vocal ensemble has never been questioned, and their performance is always gusto-filled. However, their weakness as performers has always been the very pop level of appreciation of the general Pinoy audience. And despite their massive collective talent, have not reached the star status they so deserve.
Cecille Reynoso’s subtle performance of their original “Muntik na Kitang Minahal” is easily a highlight in the CompanY’s performances for the evening. 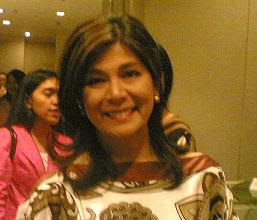 Joey Albert - *sigh* where do I begin with Joey…? Let’s get something out of the way: everyone who loves OPM, or simply good music for that matter, loves Joey Albert, including me, the wife, and dozens of other people I know.
But she seriously needs to retire from live performances.

Joey Albert is immortal. “A Million Miles,” “Tell Me,” “Ikaw Lang ang Mamahalin,” and so many others are over two decades old and still sound relevant (not to mention on everyone’s secret guilty playlist). As an artist, Joey Albert has nothing left to prove. Her much-publicized fight with cancer and subsequent flourish of health and renewed life are also more than admirable. She need not mess with the perfect memory of mine that is Joey Albert of 80’s.
Okay, so my only claim to any relative form of musical training is a brief stint singing bass in a college choir back in the early 90’s, but knowing what little I do and having seen so many singers get on stage past their prime, I honestly believe that Joey Albert could have been more creative in trying to get her old tunes (and her old notes) across to the audience without trying to sound like a poor karaoke version of Joey Albert.
The money notes are over twenty years old, Joey… you’re living a nice, quiet life in Canada and probably don’t get up on stage as much as everyone else on the show today… You are Joey Albert… music lovers like me still speak your name in awe. Stop trying so hard and just sing at the range you are left with. It’s okay. We understand and still love you and your music.
‘nuff said. 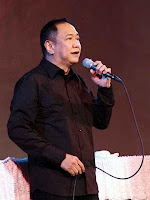 Basil Valdez is a musical demi-god. He is probably one of only a handful of Filipino singers whose back catalog is so rich that he can fill a 3-CD boxed set (that the wife and I bought and wanted to ask autographed, but the line was awful) with beautiful songs that have helped define OPM, and still have many tunes left over.
My wife, who while growing up (and growing old) doesn’t care about knowing who sang which song was treated to a wonderful awakening to Basil’s music. And where Joey Albert’s struggled singing and the CompanY’s reputation somehow proved the show wasn’t lip-synched, it was almost pure wonder to listen to Basil’s untarnished voice.
And his gentlemanly demeanor only endears him to the audience even more…
Not a bad evening by most measures (save for the very tardy start), but I was still hoping for that “Million Miles” duet between Gino Padilla and Joey Albert. If they did that, it would have already been worth the price of admission, which in our case was not cheap. Heh heh…

Photo below is a cheesy fanboy shot with Gino Padilla. Cool cheese...
‘catch you later. 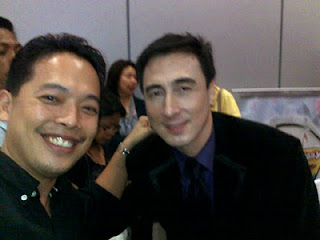 Posted by Jasper Greek Lao Golangco at 9:06 AM No comments:

Happy birthday to me...

Last week, i turned 37. Happy birthday to me. Whoopee...
37 is... well, it’s 37. Not a decade-marking year, not “silver” or whatever conjured up milestone most other years supposedly are... heck, it’s even a prime number (for all you math nerds out there, you know prime numbers suck simply because they do).
So at 37 i find myself drifting in that undefined space between one’s quarter-life crisis and the hopefully not upcoming mid-life crisis. I can still slide-skate across a mall or the lobby of Antel Global. But as time goes on, i look dumber and dumber while doing it. I’m at that point where making a variety of crazy sound effects in a quiet elevator no longer gets me labelled as “cool, funny, creative dude.” But more often than not, i now get looks that probably mean “you look old enough to probably be retarded for doing that.” Well, screw you. (and yes, you stiffs know who you are.)
But hey, there’s no escaping getting older. Heck, considering my many friends and acquaintances who have gone to the great beyond (a shout-out of RIP’s to Julius, Tina, Marf, Alfred, and others), one should be thankful for each year, each day, and practically every moment that passes by.
If there’s one thing i’ve learned for the past year, is that no matter how dark life sometimes gets, how painful some wounds are, how pointless so many things seem to be, it’s still wonderful to be alive. And I just had a nice massage...
‘catch you later.
Posted by Jasper Greek Lao Golangco at 10:41 AM No comments:

While at a mall, i ran into the promo below: 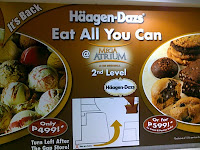 Gluttony is, after all, one of the seven deadly sins. And not only will this kill you, it’ll take you straight to hell for enjoying something so damn delicious.
An indescribably tasty way to go, mind you... therefore, i am inclined to believe that Haagen Daaz is owned by the devil.
But no... i did not partake of this. perhaps i should have...
* * * * * * * *


For what it’s worth, i have the mutant super power to need to shit at public places. So while still at said mall, i walk to the restrooms on the third level to find it’s under renovation... proceed to the fourth level, where i find all cubicles occupied... Then... * TING! * (bell sounds)... then... * grumbling sounds *... then i sprint to the fifth level where only mall staff were using the public washroom.
The wife gave me a bit of tissue. Enough by common standards, really. If there is such a thing as a common standard in wiping one’s ass. But i’ll go on record to say that once one is used to rinsing one’s asshole, wiping never feels enough. 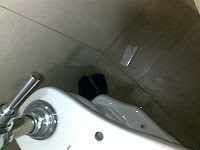 But i digress...
I spied a sad, blue (literally), discarded handkerchief right behind the water closet. Most likely someone came in and did what i did, but did not have a wife who gave him tissue, and he probably didn’t have change to buy tissue from the vending machine, then chose to punish his poor, defenseless handkerchief, then discarded it.
What a sad end to such a dignified thing... Thank the heavens for a wife with tissues.
‘catch you later.
Posted by Jasper Greek Lao Golangco at 11:25 AM No comments:

Labels: this and that...
Newer Posts Older Posts Home
Subscribe to: Posts (Atom)