Two half-presidents ago (Erap only served half a term, while Gloria was half the size of a regular human being), there was a general named Eddie who became president of the Republic of the Philippines.

I personally thought Eddie was a good president. Like most politicians, there are stories that he got wealthier during his term. But hey, who the hell are they casting the first few stones? And more importantly, have they done more than Eddie? But see, all that's under the bridge and all. And a decade and a half later, what most people will remember more is that during Eddie's term, the Philippines looked and smelled good to the world. There was business aplenty, and where there was dirt, there were pretty rugs to sweep them under. Enough for the magazine spreads, anyways. 'nuff said about that... 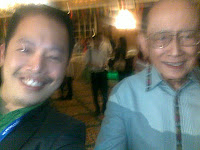 'catch you later.
Posted by Jasper Greek Lao Golangco at 4:31 AM No comments: 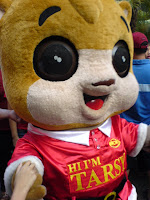 Dear Mr. Tarsier,
I would like to apologize for what happened today.
You were brought to Tiong San Harrison today to entertain our customers with funny antics only conceivable for anonymous pranksters hiding behind a giant fiberglass head of a mascot.
In my boredom today, and in the interest of doing something supposedly harmelessly stupid, i dangled P1,000 to an employee to knock on your head four times just to watch you spin around in that giant of yours looking for the culprit.  I did not know it would supposedly hurt and that you are already dizzy from the heat in there.
Now I am P1,000 poorer with a giant tarsier pissed at me.
Sorry, dude.
Good thing you're still smiling.
Oh, dammit... that's just the headdress!
Oops...
'catch you later...
Posted by Jasper Greek Lao Golangco at 12:55 AM No comments:


I watched you sleeping... And i imagine you must be dreaming of cupcakes in the clouds, flying fish, and dogs that talk and make jokes with you.

The yellow bricks on the road before you must be lined with little flowers that bat their eyelashes at you when you walk by. At the very least, because your own eyes are no less beautiful.

How big is the world for you to yet know, so many more colors than the forty eight crayons you doodle with, so much more music beyond the little rhymes we sing together with your mother. So much more life ahead...

Wake up tomorrow to a beautiful sun that may not last forever, but will shine for you and make blue skies and turquoise oceans that wrap the earth while you walk on it.

Do not forget to smile and look for the good in people before thinking ill of them. At least for now, while the innocence has not left you.


Walk through the day knowing that you are loved like the moon is loved by the stars that shine around her. The very stars that watch over you tonight like i do.

Dad
Posted by Jasper Greek Lao Golangco at 3:18 AM No comments:

I have often been accused of delusions of grandeur. Usually by my wife, many of my most honest friends, my brothers, and twice more often yet again, my loving and lovely wife.

Today is Sunday, February 13, 2011. A day before valentine’s. It is on this day and this whole stretch of weekend and beyond, that children are conceived for obvious reasons. But it is also on this day that i know of at least two gentlemen who will be laid down on their final resting places.

I do not know them nor do i pretend to. But here’s the connection:

One is an eighty-something man whose wake is constantly populated by an endless string of family members who’ve known and lived with all his ticks and whatnots throughout his long, eight-decade life. His descendants are a series of professionals in various fields, mostly with families of their own and all miss him dearly at a personal level.

The other one is larger-than-life personality who has held very various positions of power in government and the military over the course of almost four decades of service. He also has lots of friends and family at his wake. He also has the media, fellow soldiers, at least two presidents, and probably hundreds of senators, congressmen, and all sorts of officials at his wake.

Both are gone, both leave gaping holes in the lives of who they leave behind.


I am left wondering... at my age, should i still strive to depart like the latter one, who must have sacrificed a great deal to spread his reach as far as he has? Or should i continue to live my life the way i (sort of) quietly do and move on like the first old man? Who incidentally, had a whole twenty more years than the other guy. Those additional twenty years must have been filled with so much laughter, so much color, a sprinkling of heartaches perhaps, to remind one that one is human... so much... life. But to live such that one’s death creates a media fall-out that ripples through all seven thousand islands and beyond... man, that must also be something, right?
How would YOU want to die?

But of course the ultimate conceit is even thinking that i have it in my hands to choose how i will be remembered when the time comes.

Or if i will even be remembered at all. Come to think of it, those two dead guys are pretty lucky.

‘catch you later.
Posted by Jasper Greek Lao Golangco at 10:38 PM No comments: