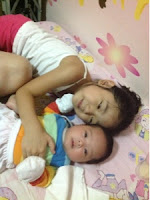 
So this entry is a bit weird for me for various reasons.

First, i haven't blogged for at least three months, and the one before that was even more months before that last one. Secondly, i have effectively changed the title of this series to include Maddie (hey, Maddie!). I had half a mind to start a totally new series for only Maddie which can go side by side with Marge's, but i figured... and figured some more... and here we are.

There are two of you now. Sometime back, when there was only one of Marge, i wrote about making sure that one stay true to who one is, and that life is not about being the "best you can be," but being the best YOU that you can be. So now that your world is getting bigger (especially you, Marge), you will meet new people, learn new things, and along the way, learn more about yourselves and each other. And oh how wonderful a journey that will be!

So now let's talk about pizza...

So just like any pizza guy, God kneads the dough, spreads the sauce, digs through and sprinkles various toppings from mushrooms to cheese to beef to pepperoni and Heaven only knows what else. But here's the catch: it doesn't matter what kind of toppings He puts, as long as the ending has to be exactly one fair pound. So He'll ensure the weight and probably finger a few toppings out to do so.

So no two pizzas are going to be exactly the same.
And it doesn't matter what toppings the other one has more of, God will surely have taken something else away to even the weight out.

So know what you were topped with and find a place where your "toppings" will be best appreciated. Imagine if you were a Meat-Lover's Pizza with bacon, pepperoni, beef bits and all... So stay the heck away from them vegetarians, kid! They would consider you poison. Instead, find yourself people who love bacon and all other kinds of animal fat.

But you wouldn't know what you're topped with unless you study yourself very *very* carefully. Then surround yourself with people and places were your "toppings" will be more appreciated and even loved. Because not everybody loves everything nor everyone, and you can never please everybody.

And here's more... We all weigh the same. So if the contest came to someone challenging you because they think they may have more cheese, ask them if they as much onions as you. Sooner or later, there will be something where you will come out on top. Just don't stop looking.

So in the same way, you can have more of one thing, and then less of another on the next. So always see people as the exact same fair pound that you are. Let this will make you fearless, and hopefully also more patient with others.
That make any sense? Uhm... Somehow, this whole theory sounds better when i tell it in person. Remind me to do that one day. And we can have some pizza while i do.

Posted by Jasper Greek Lao Golangco at 4:45 AM No comments: