The age of forty five is a strange one. Of course, any year can and will seem strange if one chooses to see it as such. It is not my birthday. But the past year saw me hit the 45 mark. So nonetheless, kindly indulge me.
The creeping reality that has begun haunting me is that even the most reasonably healthy people usually live up to "only" their early 90s. And that is being quite generous. Even Iceland, which boasts the highest average life expectancy, clocks in an average of 87 years of age.

So yes, this is as midlife as midlife can get. And maybe even a little past that.

This is where one finds one's self at the proverbial tipping point, where the arrow of one's emotions invariably toggle to and fro between a sense of contentment and accomplishment at having gotten this far, whether by luck, birthright, or both, to a swirling haze of frustration, regret, and melancholy. Brought about also by some random concoction of luck, circumstance, and probably more than a handful of decisions i would have decided differently if i knew then what i know now.

While there is the knowledge in the back of one's head that sooner than later, it would be time to start winding one's personal party down bit by bit, that is not what weighs down upon me. I miss the innocence. I miss the dreams that once seemed so easily reachable. I miss the brashness and optimism of my youth. I miss the promise of possibility simply because i was still too ignorant to know what lay ahead.

I remember an old cartoon short that featured Bugs Bunny and Elmer Fudd. The latter was led out running over the edge of a cliff, but somehow did not fall down. Bugs warns Elmer of his pending doom by pointing down, and simply saying: "Gravity." To which Elmer just waves it off, while nonchalantly stating that he "hasn't studied gwavity yet."

Knowledge does weigh upon one's dreams. The more you know, the more real things become, along with all the trappings that come with it. And thus, one grows up. And every morning is a wake up call to a reality we sometimes wish we can just sleep through.

I miss not feeling weary from my failures, thinking foolishly that the best is yet to come, because... i was still young. But i live still, and the things i am working in and on still live. Some barely, some quite well. Again sometimes because of luck, circumstance, and whatever came of decisions made. Whichever way, they are what they are now, and tomorrow is still another day.

But i am thankful. I am thankful for a life lived with a heart tempered by time, made stronger by scars, and most importantly, a heart now unafraid to bleed for those he wants to bleed for.

I am thankful, because the proverbial glass has been half-full with many good things. And while many dreams remain half-baked, the oven is thankfully still warm. So we keep baking.

I am thankful for friends near and far. You will be, too. But make sure you make time for them, just like they too will make time for you. Sometimes when you need them the most.

I am thankful, because i sit here tonight, quietly typing away at this piece over a week after i've gotten started at it. Thankful for this evening, which gave me time with you guys and your mom. Thankful for all the laughter tonight. The music we played on Marge's violin. The tunes Maddie screamed out to the iPad just to see the voice indicator move. The songs and passages i have been blaring out on my saxophones.

I am thankful that i can glance at you three sleeping soundly all snuggled up, while i listen to your dreaming murmurs.

So despite of the things going on that seem to be hanging by a thread, despite the personalities and politics that surround my life, despite all the things i wish i am and am not, and still wish i will be, and all the things i have done and have not...

I am thankful.
And after tomorrow, it will be another year.
Happy New Year. 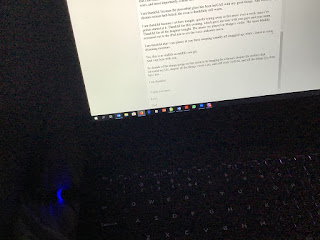 Posted by Jasper Greek Lao Golangco at 8:18 AM No comments:

My oh my, how you both have grown!
Like i said in the title of this entry, 2018 has been a most musical year for us all.

Sometime earlier this year, Maddie was found running off to the piano on her own, and pounding away vigorously. Marge continues her violins lessons, while somehow already tinkering melodies on the piano that she has learned by ear alone.

We are not prodigies, sadly. But the love of music is evident, and as imperfect as it is, it shines bright in our home.

And i am filled with joy in anticipation of what you two will bring soon.


Posted by Jasper Greek Lao Golangco at 9:53 AM No comments: