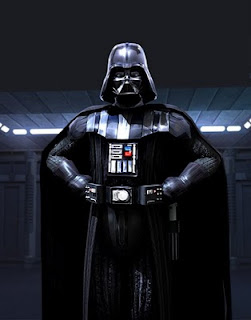 Last i heard, Yahoo! is supposed to be an information source of high esteem. Then they come out with this:
http://movies.yahoo.com/feature/buzz-log-darth-vaders-diagnosis.html
The above article could be an indicator of any of the following:
1. The Star Wars/Lucas PR machine is starting to grind something, which means we have to expect something from Georgie’s little ranch.
2. Shrinks in the place where they brainstorm for Yahoo! online articles over warm milk and cookies with too much candy sprinkles are out of work and raffled off supervillains to psychoanalyze.
3. This could be the first in a stupid series of has-been supervillain psycho-profiles by Yahoo!, which means we should expect succeeding articles to profile guys like Wile E. Coyote, Lex Luthor, and Gloria Macapagal Arroyo.
* * * * * * * *
The article in question supposes that Darth Vadah is suffering from “borderline personality disorder.” I mean, duh... The guy is wrapped up in emo-black leather threads, with a son who wants to kill him, same son who almost had an incestuous relationship with his sister, including a yucky lip-lock (awkward!!!), gets a buzzy handshake from his old boss when he gets pissed off, has a waistline so high it belongs in Hong Kong, is jammed with equipment put together from antiques dug out from Radio Shack back when the 8-track was “state of the art, “ and probably eats through a tube stuck in his ass. Ya THINK he may have a disorder?!?!
Ooh ooh... and his lightsaber is a gay pinkie color, which means that it may have a "pink-glowing-dildo-that-will-cut-your-clit" setting.  I'm guessing the lightsaber scared Amidala off...


And why on earth is there an article on the supposed psycho problems of a movie villain who doesn’t really exist? Those losers are really running out of material.
And so am i... bwahahahahahaha...

‘catch you later.
Posted by Jasper Greek Lao Golangco at 10:44 AM No comments: 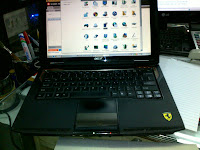 My laptop is on the fifth floor, and i'm too lazy to go grab it.
trying to use my brother's handsome (but small) Acer Ferrari...

Too lazy to work the blue tooth... settled for the infra-red to transfer some phone pics... not a slow day by any measure business-wise, but i feel like some of my neurons are atrophying from lack of stressful use.

Good thing the guys back home are getting along fine despite my erratic attendance. Almost makes me worried about the possibility of my getting irrelevant...

I've been approving an endless string of customer check payments issued by loaning companies. And what's funny is that more than a handful of them proceed to purchase appliances, high-end cellphones and even jewelry (using borrowed money!). I mean, someone tell me what's wrong with this picture? 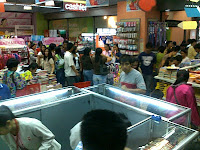 A gray, foggy, washed out day in the once-pine perfumed city of Baguio... But not a slow business day by any measure...
Can't wait for Marge to get picked up. 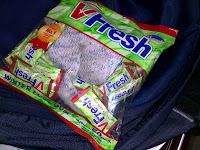 P.S. one of the amusing things about working in a retail outfit is that you get to catch some head-scratching "i-can't-believe-they-let-that-through" moments. One such moment is when our warehouse guy came up to the office to hand us a brand new pack of V-Fresh candies with a worker's glove perfectly sealed in.
No harm done, really. Unless the guy who used to own the glove picked his nose big time and the glove is inside out. Besides, we really don't plan on opening the pack. Just for amusement purposes...

Besides, this isn't the first time, much less the first company to have had something like this. But lucky for the Columbia Candy Company, I saw this when I had nothing interesting to blog about.
Posted by Jasper Greek Lao Golangco at 12:03 AM No comments:

The above is normally followed by a string of cliches in connection to going at a more than ripe old age of 98. But i'll spare you that and just refer you to Dianne Reeves' signature ballad, "Better Days."

So that was that. She's gone. We honor her memory and mourn her passing. But sadly, considering the state she was in for quite some time, we no longer grieve her loss. Arguably, we lost her not too long after we lost her husband, our grandfather, over a decade and a half ago.
At 98, Ah-Mah was no longer cognizant of people. Heaven only knew what was still going on in that tired mind of hers.  Somehow, it seemed more and more futile to try and get her attention, much less anything coherent. She seemed reduced to people marvelling at her relatively still healthy appetite.
But rest in peace, Ah-Mah. I hope you and Kong Kong are together again. It's all you were waiting for anyways.

i myself have always had this crazy-ass fascination about supposedly dying while the going is relatively good. Call it a pseudo James Dean fetish, if you will.  Given my obsession with leaving a supposed legacy before i go to the supposedly great beyond, i get jack nicholson repeatedly sneering in my poor windblown head: "what if this is as good as it gets?"

But the ironic thing about life, is that one cannot quit while one is supposedly ahead. Once one quits (e.g. suicide, anyone...?), the very act of "quitting" negates whatever "ahead-ness" one may think one has.  Besides, how "ahead" do we really think we ought to get anyways? When is it really enough?  And if one's life was such a bed of roses, why on earth should one quit? Then giving it up would somehow indicate that how good it supposedly is is a lie, right?

But i have an excuse for that.

There are moments where everything seems just intricately perfect in every way that counts to me, that i want to freeze that moment and let it be my last memory.

It's fanciful to think how one can possibly supposedly quit at the supposed "top of his game," but we'll  just fall back into that discussion about one's definition of "ahead-ness." Or would one prefer that like Ah-Mah, after a long and fruitful day's work, one fades into the night quietly, helplessly, and somewhat too tired to feel anything anymore?  Again quite possibly, the last memory you will leave those around you is that you have lived well, and everyone wishes you well in your afterlife.  And people will be both sad, and possibly almost thankful that the bell at Round 12 has already rung for you.

And should you not like it, you'd be too tired, not to mention too dead, to notice anyways.

Or maybe people will be thankful that you cared for yourself enough to make sure that people will be beyond too much hurt by the time you go.  Just like a parent would want no less for her children.  In that respect, then Ah-Mah has given everyone the love only a mother could give, up to her very last moment.

Between looking around the wake at the relatives, acquaintances and "who-the-hells" coming in and out, and thinking "everyone goes sooner or later," i look at their passing faces and wonder what supposed legacy THEY would leave when their time comes.

Some were doing really well, but then things went down. Some have built companies that are beginning to flourish (will things get better or worse, who knows?), some seem to just be drifting along.  But one thing for sure was that legacy or no legacy, everyone was going, sooner or later.

'catch you later...
Posted by Jasper Greek Lao Golangco at 10:41 AM No comments:

Hey, i almost forgot i saw “Shrek 4”... published as “Shrek Forever After.”
That’s good in that it wasn’t bad enough for me remember it was crappy, like i did “Shrek 3.” But i suppose it wasn’t good enough for me to remember either.
So in my pointless quest to document the droll details of my pathetic existence, i offer up my review of “Shrek 4”...
The movie starts off with Shrek enjoying/enduring the joys/pains of his domestically developing life, finds himself fed up, makes a deal with Rumplestiltskin (who is the only new fairy tale-based character throughout the movie), then turns the a few minutes of the movie into “Groundhog Shrek,” then Rumple proceeds to wreak some regular supervillain havoc and subjects our cast of ogres and faerie creatures into an alternate reality. Naturally, Shrek saves the day and they live the usual “happily ever after.”

So “Shrek 4” doesn’t have the novelty of “Shrek 1,” the soap opera drama of “Shrek 2,” thankfully none of the forced superhero pastiche of “Shrek 3,” but what it had the most of compared to all the rest was heart. Where “Shrek” movies at its core is really the love story of Shrek and Fiona, “Shrek 4” really tugged at the right strings and reminded an old man like yours truly why the “Shrek” franchise is enduring as much as it has.  Antonio Banderas' "Puss in Boots" steals the show... again.
There. Now i have to schedule therapy to stop myself from overusing these lame “quotation marks.”
‘catch you later.

Posted by Jasper Greek Lao Golangco at 10:14 AM No comments: