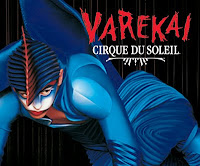 So the circus was in town. But not just any circus. This was Vegas staple showstopping Cirque du Soleil's wagon train version, Varekai. But before i could bellow to Aimee to: "FIND ME CHEAP TICKETS AT ONCE!!!" the indomitable Mia Lao informs me that she will generously transfer to me circus tickets gifted to her by some little company called BDO.

But there were only two tickets, and the entire area and the concerned dates had already been blocked off. No way to buy an additional ticket for Marge.

But there was a funky loophole...

"So here's the plan," i said, "we bring Marge, and tell those blowhards that she's only two years old, which should qualify her for free entrance on the condition that she sit on either of our laps." It seemed like a workable plan, until the day of the show when i noticed upon getting home that the wifey hadn't dressed the kid up. Bad sign.

She proceeded to tell me how she really didnt think it was a good idea to put ourselves in the potentially embarrassing situation of having to convince people that Margaret the Soon-to-be-a-Giant was not the above-average sized three-year old she really was. So off we two went to the circus... Or the "Cirque" to be more specific (and pseudo-sophisticated).

And i proceeded to be blown away.

I won't bother to talk about the acts and the eye-candy quality of the sets and costumes since google can do a much better job of that than me. But yes, save for the earnest, but sometimes dragging clown segments, almost every acrobatic act was literally breathtaking. There was no such thing as wasted space on the stage as practically every corner had something interesting to offer to wandering eyes. The live music was excellently haunting and colorful, while the vocalists (especially the male lead) were either beautifully, yet wordlessly eloquent, or i should take up some Algerian lessons to get the so-odd-its-cool gibberish chant-singing a la Sting's "Desert Rose."

The fiery double-swing finale pretty much unhinged my jaw to the ground and made me drag it all the way home. And then and there, i had concluded that i had never found myself so properly entertained by so many suicidal foreigners.

Even the wifey was impressed.

By the time of this posting, the fantastic cirque troupe must be midway through their last and final set on this last night of their Manila tour. And tonight will be the last night that the Luneta cleaning crew will rub off tracks on the floor left behind by jaws like mine.

P.S. My only regret on that show was the crowd not giving the troupe the proper send off for the evening by way of an extended standing ovation. They totally deserved it. But yes, i definitely stood in applause and respect.
Posted by Jasper Greek Lao Golangco at 5:35 AM